I loved who framed roger rabbit, and Bob has now passed. 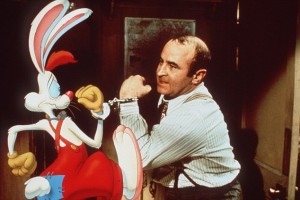 He will be missed, another great loss.

His passing comes nearly two years after he retired from acting following a diagnosis of Parkinson’s disease.

Hoskins was perhaps best known for 1988’s live-action and animation hybrid “Who Framed Roger Rabbit.” In the comedy, he played detective Eddie Valiant, who hates “toons” — cartoon figures who live in a separate showbiz world bordering Valiant’s 1940s Los Angeles — and takes up the task of proving the innocence of the cartoon title character, accused of murder. The film was the second-highest grossing movie of 1988, after “Rain Man.”

He followed the turn with performances in a variety of films, including 1991’s “Hook” in which he played Smee, the pirate assistant of Captain Hook; 1995’s “Nixon” as FBI Director J. Edgar Hoover; and 2001’s “Last Orders” as the gambler friend of protagonist Michael Caine, whose pals gather to spread his ashes after his death.

Hoskins was nominated for an Oscar for 1986’s “Mona Lisa” as a cabdriver who establishes a relationship with a high-priced call girl. Caine was also in the film. Hoskins won both a BAFTA and Golden Globe for his performance.

Robert Hoskins was born on October 26, 1942, in Bury St. Edmunds, England, the only child of a bookkeeper and a cook. He dropped out of school at 15 and took jobs as a truck driver and window cleaner, among others, before falling into acting by accident: A friend was auditioning for a part and Hoskins, who was waiting nearby, was asked to try out. A natural, he got the role.

“I fit into this business like a sore foot into a soft shoe,” he told the UK paper The Telegraph in 2009.

In Britain, he gained fame for his performance as a Depression-era song-plugger in Dennis Potter’s miniseries “Pennies From Heaven,” later turned into a 1980 movie starring Steve Martin.

Though he had a handful of recognizable roles in films after “Pennies” — including 1980’s “The Long Good Friday,” 1982’s “Pink Floyd the Wall” and 1985’s “Brazil” (in which he played a gleefully malevolent repairman), it wasn’t until “Roger Rabbit” that he broke through to mainstream American audiences.

That film drove him a bit nuts, he told The Telegraph.

“I think I went a bit mad while working on that. Lost my mind. The voice of the rabbit was there just behind the camera all the time,” he recalled. “The trouble was, I had learnt how to hallucinate. My daughter had an invisible friend called Jeffrey and I played with her and this invisible friend until one day I actually saw the friend.”

It was his daughter, however, who set him straight.

“My daughter, when I came back from filming in San Francisco, she said ‘Dad, slow down, slow down. You’re going barmy, mate.’ And I was.”

Always a steady and straightforward worker — no “Method acting” for Hoskins — he appeared in at least one production every year from 1972 until his retirement in 2012.

“There’s two things I love about this business. One’s acting and the other one’s getting paid for it,” he told the UK paper The Guardian in 2007. “The rest of it is a mystery to me.”

In one of his last roles, he played the elf Muir in 2012’s “Snow White and the Huntsman.” In the 2011 TV miniseries and Peter Pan prequel “Neverland,” he played Smee — a character he had portrayed in “Hook.”

But true to his working-class roots — The Telegraph described his natural voice as “cockney as jellied eels” — he hated to put on airs.

“I met a little old fella in Regent’s Park when I was walking a character around. He said, ‘You are who you are, ain’t you?’ and I said, ‘Yeah, I am who I am.’ And he said, ‘That’s good. I grow roses,’ ” Hoskins recalled. “And we sat talking about roses all afternoon. It was wonderful.”

Hoskins is survived by his wife, Linda Banwell, and four children.

3 thoughts on “Actor Bob Hoskins, in Roger Rabbit dead at 71”