From time to time we all need a little entertainment – after toying with our packets, routers, and switches oh my!

This is one of those gems that come around once in a blue moon.

Not only is it actually a real fun piece of software, it is also free!

This game is from Blizzard Entertainment. They seem to use all the heroes and characters from the successful World of Warcraft series.

I did have access to the beta for a week or so, and I did find myself playing more than I ever wanted to. This means they might have something cool! Did you all remember that game Magic the Gathering? The cards – not the online games. The game never did the real cards justice.

This version of the card game has some sparks that might catch your eye. Here is further  info:

The card game had been under an “open beta” testing phase since January, allowing players to download the game for PCs and Macs and battle in one-on-one matches. 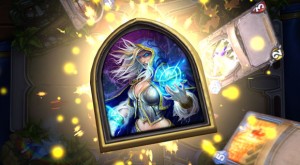 Blizzard production director Jason Chayes says the team behind Hearthstone was first assembled more than two years ago, as they sought to create a card collectible game connected to the hit massively multiplayer online game WoW.

“One of our big goals from the very beginning was to make a more accessible version of a collectible card game,” says Chayes.

Players participate in online duels, creating themed decks featuring one of nine classes, each of which boasts a special ability. For example, a Warrior can add armor for a greater defense. Players take turns drawing cards and building a pool of mana. Cards cost a set amount of mana, as players cast minions and spells to whittle down their opponents’ health and win.

Players earn cards for free by completing challenges and winning gold to buy packs. They can also enter an Arena mode, where they build random decks and try to notch as many wins for a larger bounty.

Users can pay with real money as well, but it’s not required. Chayes notes one player who moved up to the max Legend rank without spending a dime. 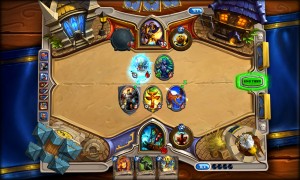 Hearthstone is available for PC and Mac, but a version for the iPad is in the works. Chayes also says Blizzard plans releasing traditional expansions as well as introduce an adventures mode where players can tackle larger enemies to win additional cards.